We had lots of excitement this month. Scallop season was a rousing success, but Irma was not the first date anybody was looking for. With changes in the path prediction coming every hour, at one point the eye was forecast to go over the mouth of the Steinhatchee River. Charlie, Danielle, Derek and the rest of the staff worked feverishly to get prepared. As Irma approached, water ran out of the river and the flats; one person told me they walked 500 yards out on dry land in Hagen’s Cove. The pictures are remarkable. The storm moved inland, the eye passing between Trenton and Newberry as the back half of the storm fell apart, protecting us from a giant surge inward. While there was plenty of damage, the Hatch did very well indeed considering the devastation that happened in the keys. If the storm had gone out over open water and come back in as was forecast at one point, things could have been much much worse. While the fishing is taking some time to get back to normal, there have already been some fine redfish and trout catches.

Here are some pictures from before and after the storm:

The last picture shows an approximately 200 pound tarpon that was caught in the river by Chase Norwood with some assistance from Brett Molzen and James Dechow. The video describing this catch is posted on the Sea Hag Facebook page. The fight on light tackle lasted well over an hour, and the fish was resuscitated and released alive. It’s clear to you don’t even have to go outside the river to catch big fish in Steinhatchee.

October is one of my favorite months to fish. The water is cooling into the 70’s, the days are comfortable to fish, large redfish are staging for offshore migration never to return, and trout move into shallower water. Grouper are more active and are starting to be taken in shallower areas of hard bottom. Given the way fishing has bounced back quickly after Irma it will be an excellent offshore and inshore month. Live pinfish and dead squid and Spanish sardines will be the baits of choice for grouper this month, and kingfish will be migrating as well. If you find schools of offshore baitfish, try trolling around them or throw out a live bait on a float when bottom fishing. Inshore, everything is around. Migrating cobia and Spanish mackerel are moving south for the winter. But for our favorite inshore fish, reds and trout, this is a month to get out and fish. Redfish have been up in the weeds and kind of lethargic but they are now beginning to herd up and as you can tell from some of the pictures, when anglers find a school they are bringing lots of fish to the boat. While schools of redfish might be close to shore on flood tides (and hard to see), on lower tides they hang offshore and when in feeding mode can be seen as “nervous water” in 2 to 3 foot depths up to 300 yards or more offshore. Always keep an eye out for moving water and the occasional tail. Trout have been out in 8 to 10 feet of water but have now moved into the shallower flats, both nearshore and around the offshore humps like 9 Mile Bank, Little Bank and the area known as Doghead, north of the Bird Rack toward Keaton Beach. Nice limits are being taken using Gulp baits on popping corks, but for covering more water consider using just a jig and regular soft bait. Most recently our better fishermen have been using Hookup, Slayer and Bass Assassin jigheads, and in addition to Gulp baits, Bass Assassin shads and curly tail shads in the Green Moon, Chartreuse and the new Fried Chicken color. Jigs and soft tails work perfectly for reds, trout, Spanish, flounder, bluefish….just about anything you can catch in our area. Our Ship’s Store has all these fishing options and many more; stop by and pick up what you need. And get out there this month… 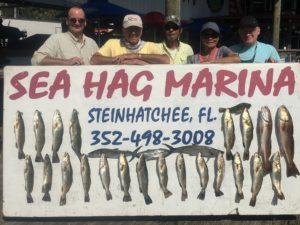 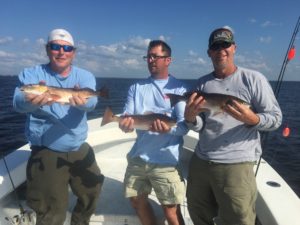 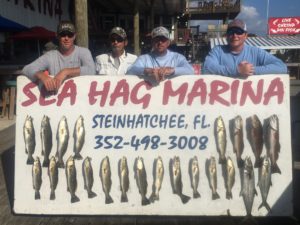 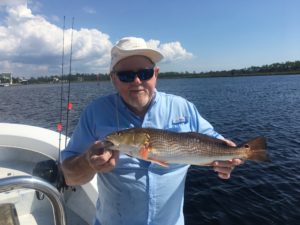 September was a good month for trout and reds and also scallops. Best year for scallops that I can remember. Limits the whole season. Here comes October and cooler weather and excellent fishing on the flats. There will be plenty of trout and reds to be found. The trout will be shallow and deep and the redfish will be moving out on the flats from the shorelines. This will stay steady throughThanksgiving. Plenty of Spanish mackerel around and also a few small sand trout.   Give me a call and we’ll catch a bunch.