Well, there was this hurricane named Michael….my little cabin did well, but our thoughts are with those who were flooded once again. At the Sea Hag Marina, the routine is becoming standard now. Great preparation is a key to successfully getting through a storm, and the crew was up to the job, in spite of the expected flooding. From taking great care of everyone’s boats, to moving inventory upstairs, to keeping everyone aware on Facebook with live broadcasts, the marina showed why it’s the best marina in the Big Bend. Congrats to everyone for a job well done. 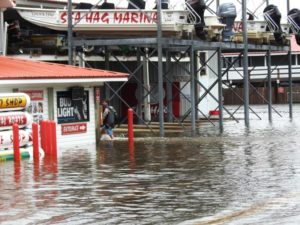 Fishing…it took about three weeks for the fall temps to finally arrive. While the fishing was good early in the month, right after Michael came through the area the temps started to drop, then reached their normals for the year in the last week. The fish responded as expected, with increased appetites and activity. Lots of whitebait flooded the area. Trout were in the process of moving in to the flats, but early in the month large catches were caught near the offshore bars along with plenty of flounder, Spanish mackerel, black sea bass, blue runners and the occasional cobia. Redfish really came alive at the end of the month and were schooling well by that time. Offshore, there were some great amberjack taken, but unfortunately the season is closed as of November 1. There were kingfish around offshore structure with fair catches of gag and red grouper. Here are some pictures of fish caught this month.

This is always a month of uncertainty in terms of temperatures but in general things don’t get really chilly until around Thanksgiving. Regardless, the fishing will be excellent. You’ll need to change your approach when cold temperatures hit. When the water temperature gets into the ‘60s the fish become a little less active, so if you’re fishing lures or jigs, slow down your retrieves. This will be become a requirement in December and January, but most of this month water temps will be in the ‘70s. Look for larger solitary trout near shore in the mornings with topwater plugs or jigs, schools of redfish a hundred yards or so offshore and moving in and out with the tide, and lots of Spanish mackerel, bluefish, ladyfish and jacks around schools of whitebait in any depth. On the flats, look for clear water with mixed sand and grass bottom and fish lures, or popping corks tipped with love shrimp or Gulp baits in three feet of water. This will also be another good month to target flounder. While we don’t get the 10-15 pounders that are caught on the east coast, several three or four pounders will make some fine eating. Fishing jigs slowly across large sandy areas, especially tipped with Gulp baits or live shrimp, should result in some nice fish. When they hit, wait a bit for them to get the bait into their mouths before you set the hook.

Offshore, amberjack are closed, but red and gag grouper are open, and there are still kingfish and cobia around offshore structure and schools of whitebait.

This is a great time of year to take the family fishing and avoid the summer crowds….and you are more likely to catch some great fish. Remember that the Sea Hag Marina Ship’s Store has live and frozen bait, a huge selection of lures and soft plastic baits, and the best deal ever on our fleet of rental boats….so make your reservations now….and have a wonderful Thanksgiving. 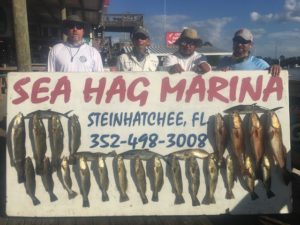 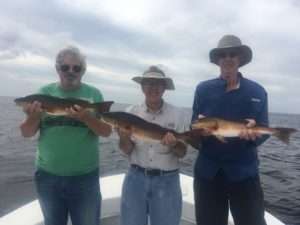 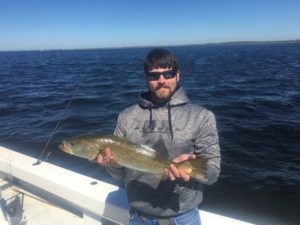 October was a good month on the flats. Plenty of trout and red fish. We also managed to find a few hot spots for sand trout. Spanish could be found around the sand bars and a few cobia have been boated.  We finally got some cooler weather which will help to get action on the flats heated up.  November promises to be red hot for flats fishermen. I still have a few open days if you want to catch some