As expected, the fishing was fantastic in Steinhatchee during October. Although the inshore waters are still a little stained from the summer rains, trout are on the flats, lots of great grouper were taken offshore, and kingfish and amberjack, cobia and Spanish mackerel rounded out some fantastic fishing trips this month.  We found whitebait on a recent inshore trip and were catching trout on every cast; I even managed a good number on fly by blind-casting, and we jumped a tarpon. Redfish are beginning to become more consistent and are beginning to school; some great bull reds have been taken on light tackle around the offshore bars as the schools begin to migrate offshore.  I took Brent Bentley and his dad Jack out for some trout fishing mid-month and we found some excellent keepers, seen in the first picture below. Old friend Russ Roy connected on this eating-sized black drum.  The pair of nice redfish were caught by Brycen Bracewell, Elijah and Skyler Hewitt, and Richard Goodkin took this great gag grouper in 25 feet of water.  Rob Blackwell and James Andrews found these great kingfish, also in relatively shallow water offshore. 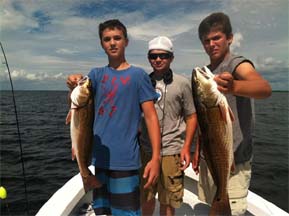 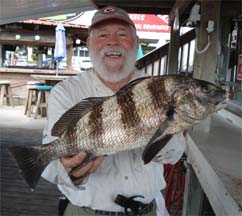 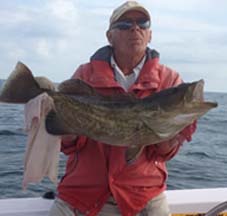 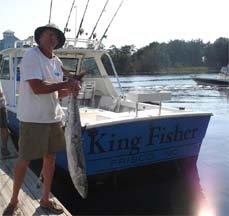 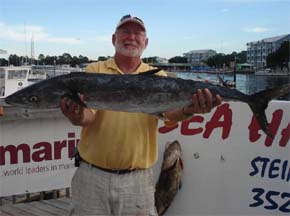 The forecast for November will be just as good. Although the season is closed for gag grouper, remember that the limit on red grouper is four, and there are many many reds being taken. Round out the offshore trip with some Florida snapper and some amberjack and you will have a fantastic time. We have the finest offshore guides in our area, so make sure you book your trips early. Bottom fishing with live pinfish or frozen threadfin herring, cigar minnows or squid, all of which are available at the Ship’s Store, will be most productive. Always try and put out a live bait rig under a cork when fishing over hard bottom because you may very well pick up a kingfish or a cobia. When the bite stops, try trolling diving plugs such as the Stretch series over areas of hard or Swiss cheese bottom to pick up additional fish. Nearshore, fish structure in  25 to 35 feet of water for cobia and amberjack, and look for diving birds to locate schools of whitebait and the kingfish and Spanish mackerel that will be traveling with them. Once you find some bait schools, set up a chum line and fish with light tackle and wire leaders, throwing jigs or spoons for mackerel and drifting live bait for kings. Inshore, the flats are the place to go for trout and redfish. Fish north of the river near the bird rack outside of Big Grass Island (29° 43.21’N 83° 34.31’W) in 3 to 6 feet of water, or closer to shore on higher tide behind the island in areas of potholes. Another hot spot has been the sand bars, cuts and pothole areas south and west of Rock Point (29 41.003’N 83 29.534’W). South of the river there have been some great trout catches outside of the Pepperfish Keys (29 31.074’N  83 25.849’W). Drift across sandy areas mixed with grass, and fish popping corks like the Cajun Thunder rigs on 24 inches of 20 pound fluorocarbon leader, tipped with a jig and Gulp shrimp or grubtail combo, or  a ¼ oz. DOA shrimp. The fish are schooling so when you get a few fish in one area, stop your drift and fish that area heavily, or drop a weighted float so you can come back after drifting a bit further. Redfish will be either in schools (so look for large patches of “nervous water” or moving in and out with the tide outside of structure such as oyster bars or rocky areas. With adequate water in the early mornings, fish topwater plugs or suspending lures such as the Mirrolure Paul Brown Corky lure or the Mirrodine, or the Rapala Subsurface Walker (SSW). All of these lures and all terminal tackle you will need are well-stocked at the Sea Hag Marina’s Ship’s Store. You can find great rods, reels, apparel and even get your reels filled with new line.  November should be a great month to visit the river.