The fishing has been great this month as long as you’re willing to put up with a little wind. A solid two weeks worth of wind kept some folks close to shore but those willing to make longer runs down to Pepperfish Keys to the south or Dog Head to the north were rewarded with some excellent catches. The water has been clear, and all kinds of baitfish from rainbait to whitebait to mullet have been plentiful along the shorelines and the nearshore bars. Captain Tommy Thompson and I fished near the end of the month and found redfish near creek mouths, especially on a falling tide, and we fished exclusively with topwater plugs. While we caught a few nice trout, more of the trout action is taking place in slightly deeper water, 3 to 5 feet, using cork rigs or jigs over mixed bottom. On severe low tides, fish have also been taken in several of the deeper cuts (old creek beds) that run through the flats, such as the deep cut outside of Clay Creek. And finally….on the last weekend of the month I attended an event in Gainesville and have a definite report (from Elliot McDavid, so you know who to blame) that there ARE trout in the river, in spite of the mild temperatures this month. More about that later.

While offshore boats were able to take gag grouper, both red grouper and amberjack were closed. However, Florida snapper and black sea bass were plentiful on hard bottom and provided some great eating for those wanting an offshore trip, and kingfish were still around throughout most of the month to provide some screaming drags.

Here are some of the catches at the Sea Hag Marina this month…it will give you an idea of how good the redfishing is right now.

It’s always exciting, because even with the mild temperatures we’ve had, there are already some trout being taken in the river. When we get to more normal temperatures for December, especially after cold fronts, you can expect to find trout in the river in good numbers; in very cold weather, the water temperature near the surface is much colder than in deeper water. You can always call the Ship’s Store to find out what the bite is like, but even when trout do come in the river, they are also available in creek beds and around oyster bars and rocks that can hold heat. As the water temperature gets down into the low 60’s, it may be worth your while to switch your morning trips to mid-morning and make sure you fish the afternoon warming waters when the fish are likely to be more active. With lower temperatures, there is one singular tip that will help you catch more fish: slow down. Being cold-blooded, fish are less active in cold water and less likely to run a distance to track down, for instance, a topwater lure. This is the time of the year to fish slowly suspending plugs, or if you’re using popping corks or jigs: slow down your retrieve. Additionally, sometimes the bite is very different in cold weather so be alert for even the slightest tap (braid line helps a lot in winter fishing). Live shrimp, Gulp shrimp and other artificial shrimp fished with small weights or on jigheads to get the business end near the bottom will produce trout in the river and in deep creek beds. The classic “river lure” is the 52M Mirrolure which will sink nicely. For shallow water, suspending lures like the Mirrodine XL, Mirrolure Catch 2000 Junior, Live Target Scaled Sardine, Paul Brown Corky Lures and other similar lures will sink more slowly which is your aim in winter lure fishing. December is a great month in spite of the temperature, since fishing in the river is an option. When the weather is better, run outside to fish creek beds and structure on higher afternoon tides. Winter is actually my favorite time of the year to catch big trout, so give it a try, and send me your pictures and reports.

And please, have a very happy holiday season and a Merry Christmas to all of you from the Sea Hag Marina. 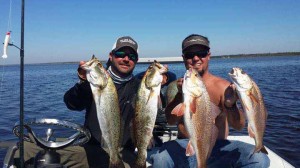 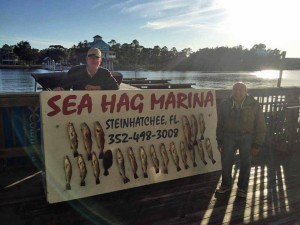 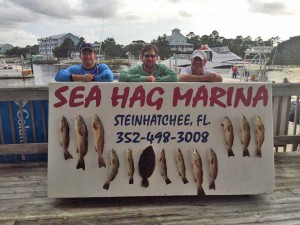