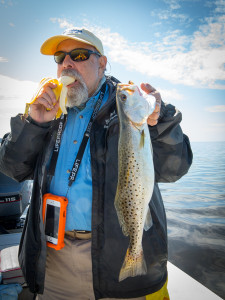 February was an inconsistent month, which happens when weather is inconsistent. We never had a sustained cold front to drive large numbers of trout into the river….but there were some huge trout caught in the river in fewer numbers. I saw a picture of one fisherman with an 8 pounder caught along the bank near the mouth of the river, but large numbers of keeper trout never have been available consistently at all. In fact the trout fishing was pretty challenging until near the end of the month when there were some excellent catches and more of a winter pattern developed. Redfish were scattered but also became more available at the end of the month. On the last weekend of the month, there was a Pro Redfish Series tournament event at the marina. The winning team was John Lannon and Matt Cowart with 14 pounds (see pics) but Sea Hag sponsored teams came in 8th (Captains Mark Brady and Grant Wilson), 9th (Chase Norwood and Luke Matthews) and 10th (Captains Scott Peterson and Danny Shelton) out of 43 teams entered. Chase and Luke had to release a heartbreaking 27 ¼ inch barely oversized fish. At the Fiddler Crab Festival tournament there were some fine fish caught as well as you can see by the pictures. The most interesting fishing results this month had to do with sheepshead. While everyone has been waiting (and checking) for their usual arrival on offshore structure, air boats have been landing huge catches in the back of many nearby creeks. These males and the larger females should be migrating offshore any day now. Offshore fishing has been limited by closed gag grouper seasons and the weather but some nice red grouper catches were made when the weather allowed the offshore runs.

The best inshore fishing this month as water temperatures gradually rise will be either back in creeks, or on sunny days with a good high tide in the afternoons after the bottom has warmed up. Baitfish are still scarce on the flats but will be getting more plentiful every day. Particularly look for areas of rocky bottom that will warm on the lower tides and then fish will move to those areas as the tide floods. If cold temps persist, there may well be another migration into the river, but you can call our ship’s store for an up-to-date report at any time. Additionally, people are patiently waiting for the sheepshead offshore bite to begin. Any offshore structure in 15 feet or over would be prime places to search out, but the most obvious is the Steinhatchee Reef, about 8.5 miles out from the channel, which consists of a number of rockpiles. You can find GPS coordinates for the reef and other offshore structure on our website at this location:   http://seahag.com/offshore-fishing/

Currently fiddler crabs, the bait of choice, have been scarce, but live shrimp will work fine. Fishing for sheepshead is pretty much an art unto itself, and our good friend Russ Roy has written a great primer of hints that you can find here: http://www.gofc.us/wp/targeted-species/sheepshead/

Near the end of the month we can expect to begin to see some migrating pelagics (Spanish mackerel and kingfish, along with cobia) to show up in our waters. As always, you can call us for the latest updates on what’s biting and where, and remember to consider one of our rental fleet of boats, and our live shrimp and pinfish tanks to help you be successful on the water. Here are some reports from our excellent guides… 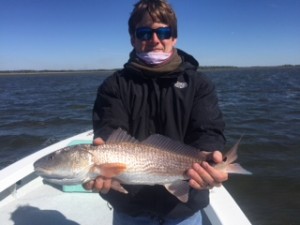 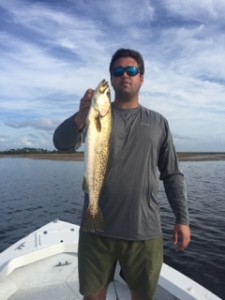 On the handful of days it wasn’t blowing we have had success. With water temps in the low 60’s we are seeing a number of fish, however they are slow on the bite. March is typically a great month …  as the water warms the bite will really turn on and the fish are really hungry since the bait has moved offshore to find warmer water. We still have some great dates left in March for your fishing pleasure. We fished this past weekend and nailed some limits of reds and a few nice keeper trout. 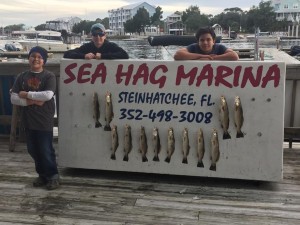 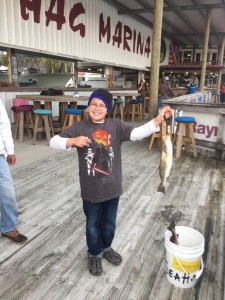 The trout are slowly returning to the flats.  The area around Pepperfish is the hot spot. There are still reds to be caught in the shallows but most are under the legal limit . 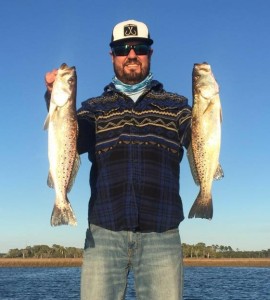