Ahhh, the weather. The fishing has been excellent this month when the weather allowed. In spite of lots of small craft advisories, fronts loaded with rain, and a few days of bitter cold, the fishing has been even better than the average February. Inshore, although there was some inconsistency related to water temperature, trout were in their usual wintering places. When the temperature dropped, they retreated into deeper water in the river, or especially in creek holes. Dallus Creek was described by one person as a parking lot; while occasionally the fish had to be culled carefully with lots of borderline keepers, there were some excellent limits of 19 inch fish taken out of the holes. Other deep holes in creeks held fish throughout the month. Especially earlier in the month, the deep cut at Pepperfish Keys was a hot spot. Because the water temperature stayed low most of the month, there were also some excellent trout taken in the river, including some nice catches upriver of the bridge near the power lines. Redfish action was slow. There were days we saw lots of fish, but they just wouldn’t eat…not unusual this time of year. In fact, during the “Lots of Spots” tournament associated with the Fiddler Crab Festival, there was only one redfish caught. One way some anglers used to locate some action involved fishing some of the holes in nearby creeks with shrimp-tipped jigs; there were some nice black drum and sheepshead taken in this way. And speaking of sheepshead, there have been some great catches near the end of the month on the offshore rocks. It appears at this time there have been largely the smaller males taken…but the mamas will be joining them soon. Offshore fishing has been good as well, when available. Some nice red grouper were taken, and amberjack were plentiful and pulling hard. And as usual this time of year, there were some monster bull redfish mixed in among the grouper. Here are some of the catches that came into the Sea Hag this month.

March is always a transitional month. Trout will be moving in and out of creeks and rivers based on water temperature. When the water temperature gets into the middle 60’s look for them to move onto the flats into grassy areas which will just be starting to hold pinfish. Remember to fish slow. Ripping jigs and lures rapidly will not produce as many strikes as fishing very slowly. Redfish will begin to school near the end of the month, assuming average water temperatures. They will still be close to structure, including in creeks and around oyster bars. Live shrimp or cut bait will be productive.

The sheepshead bite looks to be a good one, especially after the females arrive on the offshore structure to spawn. All that’s needed is a jig head heavy enough to get to the bottom and either shrimp or fiddler crabs to tip them with and some 25 pound test fluorocarbon leader. Some experts are partial to either a fish-finder rig or even a knocker rig, with a sinker sliding right down next to a long-shank hook. When spawning the fish will not leave the rocks, which means you’ve got to drop the baits right into them, so bring along extra tackle. I drop my bait down into the rocks, then reel them up about six inches to keep them suspended in the strike zone. Be prepared to set the hook on the slightest tap. The subtle strike is one reason fishing with braid is especially helpful. I like to use my heavier spinning gear with from 10 to 20 pound braid. It’s still a little too early to look for the pelagics to come through, but possibly near the end of the month or certainly by next month we can expect to see some bait schools and Spanish and king mackerel following them. Remember you can get live bait from pinfish to shrimp to fiddler crabs at the marina along with tackle tips and hints.

There are some tournaments happening this month, including the Steinhatchee Community Tournament on the 14th and the Taylor County Fishing Club on the 28th.

Now here are some reports from our guides: 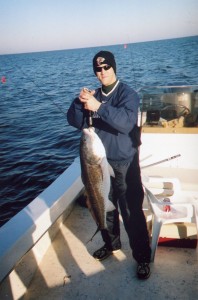 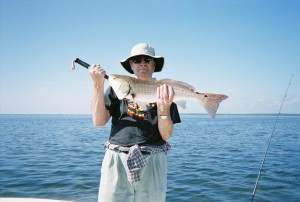 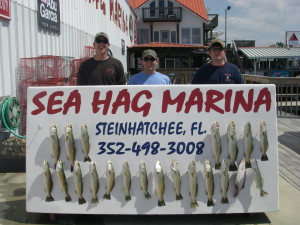 The shallow waters along the Florida gulf coast are finally starting to warm. The trout will be moving from their winter hideouts onto the flats. The time is right to catch them. While March’s weather can still be unsettling, the rewards can be a cooler full of fresh fish.  Redfish are also being caught now and I still have some days open if you wish to catch them.

The sheepshead have finally made it to the spawning grounds after a mild winter, while the grouper and snapper are biting great offshore, it’s hard to run past these delicious fishes that put up such a magnificent fight on light tackle, look wonderful on a plate and taste so good.   I have some deep water trips booked but will try my best to convince folks to stop in 20-30 feet and reel in a few sheepies.  Most of these spots can be reached on days when the weather makes longer runs uncomfortable.  Scale back the tackle to 10lb test, slide a half ounce sinker on and tie the hook right to the line…attach a shrimp using the classic Dick Bowles maneuver…and hold on.  As always, release the females to spawn and keep only males.  Sperm does not seem to be a limiting factor in the reproduction of these feisty fishes.  See you on the water. 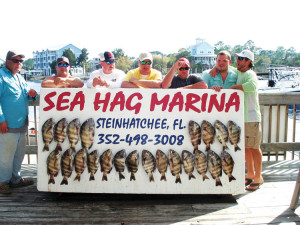 March 5th is the first full moon. That night light should spark the start of the loving period of sheepshead. Back in the last days of drive-in movie theaters, that light in the night sparked a ‘hickey’ on each involved not watching the movie. Giggle, some of ya’ll remember making-out at the drive-in, and those later born can still appreciate the same young spark though not having any spark idea about a drive-in movie theater. Anyway, the sheepshead are going to start making out, say spawning, call it making more sheepshead for our kids’ future. Both sexes enjoy ‘popcorn shrimp and fiddler crab’ to support energies of making more sheepshead. A mature female sheepshead will drop a quarter million eggs when she feels the condition best suits. She’ll do that over six times during spawn. The multiple smaller males know the deal. The point is, the big females are delivering our future of fun; release them to continue fun for our legacy and us. It is a teaching opportunity for you with the kids. It’s a hand-down high point. Double daily limits just aren’t cool. It brings down Fed regulations. Why bring on more regs when fish is better served fresh. You know how to bring it home fresh to mama. Sea bass and Florida snapper are bang-bang biters just offshore the sheepshead spots. In my opinion, seabass are the most delicious butter sautéed filets I’ve ever ingested. Are they big grouper size? No! Do they yank down as hard? No! Just sauté and shut your mouth.