The weather was dicey at times but the fishing was excellent this past month in Steinhatchee, with the usual suspects and one very surprising catch. While the temperature shifts kept the trout and the anglers guessing (flats? river? creek beds?) in general the bite was more consistent. Early in the month, with extreme low tides, we continued to find large numbers of small and slot-sized trout holed up in deep cuts in the flats as the tide came in. There are two major challenges for most folks with this kind of fishing: first, where are these holes, and second, how can I get my 24 foot Contender into them? (you can’t).  I’ll give you some of these spots in the forecast below. Offshore this past month things were slow in terms of grouper but our offshore captains brought in lots of amberjack, Florida snapper, and especially some fine black sea bass. Here are some pictures of what our customers have been bringing in to the docks.

I’ve fished the Steinhatchee River area for 15 years and never seen a striper caught here. They are stocked in Lake Talquin, near Tallahassee, and are caught in some panhandle rivers, and we’ve heard rumors of some caught in the Suwannee but nobody ever remembers catching one at Steinhatchee. And this fish was fat and appears to be spawning stock. We’d love to see more in our area.

There are deep holes scattered throughout the flats around Steinhatchee. Most represent ancient creek beds. When we stumble across them we always mark them carefully on our GPS units. Some are clearly seen on charts and some are just not there. I don’t mind sharing a few of those holes (but some I won’t). One of the most obvious cuts are directly out in front of Rocky Creek in an area we call the Tongue. These are easily seen on all charts and are in the general area of  N29 36.087 W83 25.636. Another well-known hole is closer to the river, and lies behind a long-time landmark which is now almost gone, a large tree that settled on the flats. It was a holding area for anhinga for many years but the branches are almost all gone now. The hole, which is about 30 feet across and 6 feet deep on a medium tide, is just outside of that trunk, at N29 38.837 W83 24.809. The last area is a long creek bed a quarter-mile or so offshore of Rock Point, to the north of the river. This is a meandering creek bed that will hold fish on low tides and also during cold water temps; the creek bed can be found at N29 41.003 W83 29.534. All of these spots require careful approaches on low water; you will need a bay boat or a skiff and you may need to get there using a trolling motor, but in the right conditions these holes can provide non-stop action. Live shrimp or slowly fished lures work very well in these holes. As the tide comes in and the holes fill, the fish move out onto the flats, especially with warming water temps. The redfish bite has been inconsistent, but most are being caught near or inside of creeks with lots of oyster bars. As the spring progresses we’ll see more schooling activity and a better bite. Offshore, the excitement in our area is the newly released gag grouper regulations for the gulf. A special season for the five county area including Taylor County and the Steinhatchee River will result in gag grouper being available between April 1 and June 30th, the only area open during this time period. The rest of the gulf season will be from July 1 to December 3. Red grouper season will remain open from April 1 to January 31st. These regs are a mixed blessing, but we will have access to grouper during a time of year before any other areas can fish. I’d recommend making your grouper trip plans early because gag season is a very busy time in our area and our guides get chartered well in advance of the season. If you are going yourself, plan your accommodations early and call the Sea Hag for reservations in our newly updated cottages. For this coming month, amberjack, sea bass, Florida snapper and the probable arrival of cobia will provide some fine action. And lastly, this month should provide a great sheepshead season.

While it’s possible to catch massive numbers of sheepshead during the spawn, Captain Brian Smith has some great recommendations in his guide report for this month. Please keep only enough to eat so we can maintain the excellent fishery in our area. Fish offshore structure such as the Steinhatchee Reef with a fishfinder rig with a live shrimp or fiddler crab, or use an appropriately heavy jighead with either live bait. Fish as close to the rocks as possible and be patient; when the bite turns on the action is fierce. You can always contact the marina to find out the status of the sheepshead bite before you come.

Here are some reports from our fine group of captains: 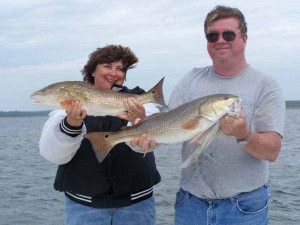 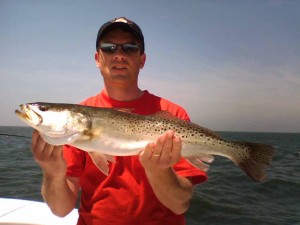 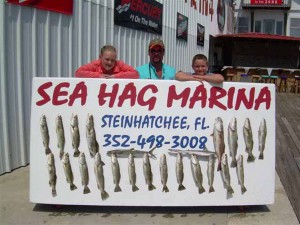 The trout are very active right now and it will only get better as the year progresses. Large numbers are being caught both north and south of the river. A party I fished last week released over 30 keepers and half of those were over 20 inches. Catching a few red fish but that will only get better too as they start to migrate from the creeks to the shallows.  March looks very promising for limits of keeper trout. Plenty of sea bass to be caught in the mid range rock piles and also some reports of sheepshead at the reef. Still a little early for cobia on the flats but if you like a good fight the big bluefish are on the deeper flats, and not the schools of 2 to 4 pounders but the 5 to 7 pounders. If you like blackened red fish then you need to try blackened bluefish…just make sure they are fresh. The local restaurants will cook your catch for you and both Fiddler’s and Roy’s do an excellent job of it. 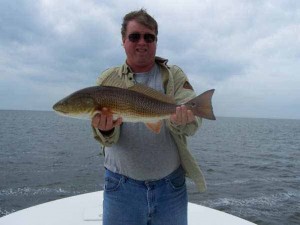 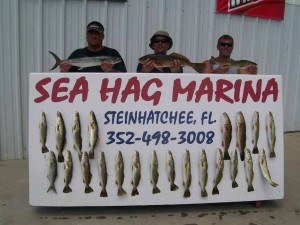 I have a few days open for charter in March and even 2 weekends. If you are looking to fish in April or May you better get your plans together quick. This time of year fills fast. There are plenty of excellent guides in Steinhatchee or if you prefer you can always rent a fine all-around boat from the Sea Hag marina.  Don’t miss out on the best inshore fishing that Florida has to offer. 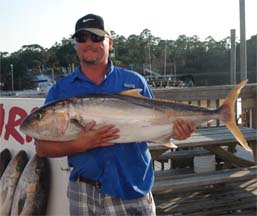 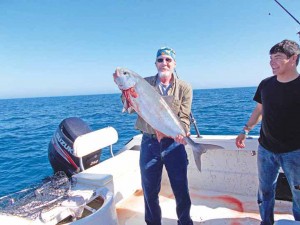 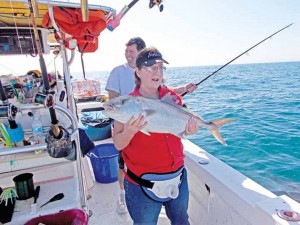 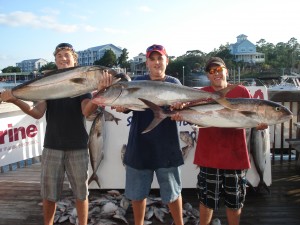 March rolls around once every year.  And every time it does, my wife, Gina, remarks, “I suppose you’re going to get on your soapbox and tell everybody to release the big female sheepshead and set a personal catch limit less than the 15 fish per person regulation”.  I hate to admit it, but she is right, as she tends to be most of the time.  I’ll try not to do it, but I’ll predictably scribble a few words in about releasing the breeding females and not keeping too many fish that are actively spawning.  I can’t help myself.  I don’t want us to weaken the next generation of fish so our next generation of humans will likewise enjoy the sheepshead run as we do currently. However, over the past few months I’ve been writing about fishing for black sea bass.  Specifically, catching sea bass that are in spawn. It would appear to be rather inconsistent, if I say so myself.  Allow me to take a few minutes of your time to clear that contradiction.

Isn’t a spawning fish like any other spawning fish?  The simple answer is yes.  The fish is trying its best to reproduce fish of its own kind.  The odds against any fertilized egg surviving to maturity are terribly low.  Factors, from predation, weather and environmental changes all the way to just bad luck, cause the vast majority of spawn to perish young.  That is why fish produce tens of thousands to millions of spawn per event.  There is hope in the masses that a few will reach maturity and reproduce themselves. However, there are differences in the way some fish spawn.  Let’s consider our topic duo, sheepshead and sea bass.

In the Big Bend area, sheepshead spawn February through early April, depending on the severity of the winter.  The spawning period is approximately 75 days.  The female sheepshead can discharge her eggs multiple times per season.  During each event she releases 11,000 to 87,000 eggs mostly depending on her age/size, to a lesser degree current environmental conditions.  The abundant males near her, quickly try to fertilize the eggs.  All this activity occurs over historic spawning sites.  The sites are typically 20-40’ in depth, firm with relief, such as, large rocks, rock piles, artificial structures like jetties, channel markers, reefs or wrecks.  Over time, fishermen have found these secret and not so secret specific spawning sites and capitalized on their find.  Because fishermen have a difficult time keeping their mouths shut, the secret became a bull’s-eye flotilla of fishermen over the spawning sheepshead.  The fishes ‘no-tell motel’ is now in the public media with the larger females being the big story. Black sea bass, on the other hand, spawn December through May depending on the severity of the winter.  However, in their case, cold water promotes and prolongs their spawning activity.  The spawning period can be greater than 130 days; twice that of the sheepshead!  During the spawn, a two year old female sea bass can release ~30,000 eggs while a five year old can release ~300,000 eggs.  The aggressive males are prompt to fertilize the eggs.

All this activity occurs over square miles of indistinct hard live bottom.  Sea bass commonly spawn on hard lime rock bottom 15-50 deep.  The sea bass population is strong and ubiquitous in the Big Bend area.  With the exception of “by-catch” sea bass being trapped in thousands of so-called crab pots (a law loophole allowing fish trapping to continue), hook and line fishermen could never exploit the sea bass fishery. Here is the sea bass kicker:  Sea bass are protogynous hermaphrodites.  Wow, what a word!!  It means that sea bass, like their cousins grouper, are all born female and change to male in their second to fifth year, after they are over the legal size limit of ten inches.  Sounds to me they just grow up and get some sense, but I wouldn’t admit I wrote that or attempt to defend it.  What protogynous hermaphrodites translates into fishermen talk is… the big fish we are after are the males. Think of deer hunting as a comparison. Fishermen are not taking the pregnant females out of the population!  We’re just allowing some the younger dudes to apply themselves in the big guys absence.  That is why fishing for spawning sea bass is completely different than spawning sheepshead.  The big fish we after are the opposite sex.  In terms of maintaining a stable fishery, protecting the breeding females far outweighs the males.  I’d rather not defend that either, yet it is true.

Thanks for taking your valuable time to read my article.  Take care of yourself and the tackle.

“True wisdom consists in not departing from nature and in molding our conduct to her laws and model.”    Seneca 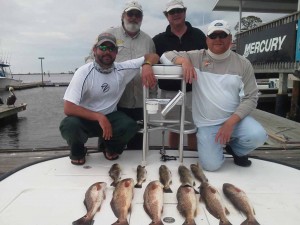 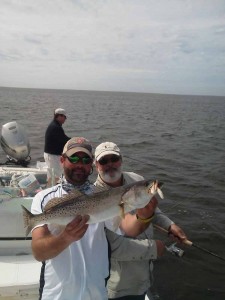 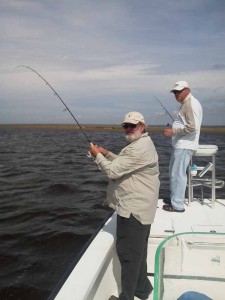 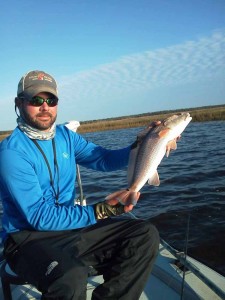 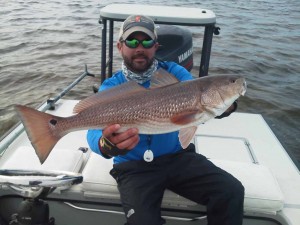