We hope everyone had a great Christmas, and that you were able to spend it with your family. 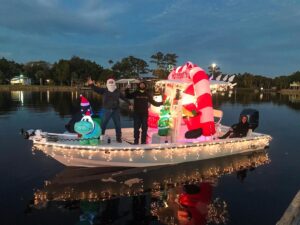 It was a very good December for Big Bend fishing in our area. In spite of some wind, the weather was relatively mild until the very end of the month. Some really great redfish catches were made this month, with the moderate temperatures allowing the reds to move around in very shallow water, and some monster reds were taken in shallow creeks. And this is one of the best months for trout fishing and that held true with some large gator trout taken nearshore and schoolie keeper fish in deeper water, and some nice fish are already in the river. And while it’s a little too early to target snook, we’re getting some big ones now in the area; hopefully they will survive the cold weather to come. See below for some pictures from this month.

On Christmas day we got our coldest day of the year. Given that trout were already being caught in the river, it’s likely this new front will result in lots of keeper school-sized trout in the river. For tips on river fishing, look at last month’s Fishing Forecast.

In terms of inshore fishing outside the river, there are a number of things to keep in mind. The first is safety. This is the time of year of low daytime tides. It’s not unusual for severe negative tides, so more than any other time of year, make sure you look carefully at tide tables. Not surprisingly, the colder morning temperatures are usually not the best time to fish outside the river. Delay your trip until the afternoon warming trend and higher tides are present. Trying to run in the Steinhatchee area, with multiple sand bars, rocky areas and oyster bars, can be hazardous if you don’t know a little about the area. Consider getting one of our excellent guides if you are not familiar, but you can also get a Sea Hag rental boat and get some tips from the Sea Hag staff about where to run. This time of year, water temperature differences of a degree or two can make a huge difference. On morning low tides, rocks and bars are exposed. As the sun rises, these shallow areas are heated and when the tides come in, that heat is maintained in the area. That’s why you will see mullet and trout concentrated around rocky areas on high tides, and those are the areas you should fish. There are great concentrations of these exposed rocks in the Rock Point area to the north and Sand Point, Hardy Point and Tater Island areas to the south. Don’t try to approach any of these areas directly, but work your way slowly into shore with the tide. Because fish are cold-blooded, they are not very active in winter and they won’t chase bait or lures very vigorously, so fish everything slower than you think you should, and then cut that speed in half. Fish suspending lures (we particularly like the Paul Brown lures or Bass Assassin’s Salty Snacks, but any unweighted plastic jerk baits and light swim baits will work well, as will floating crankbaits like the Cotton Cordell) and retrieve them very very slowly, just enough to keep them above the rocks. We catch large fish in as little as 2 feet of water. Trout will be in schools; when you catch one fish, you are likely to catch others until the school moves. When the bite stops, move around until you find them again. Almost all of these fish caught outside of the river will be keepers, unlike the smaller fish in the river. Be careful and find some productive spots. They are likely to be productive year after year during the winter. While the tide is up, work your way into creeks that may hold redfish and trout. Fish deeper holes, which are frequently around bends in creeks, and remember to fish slow. Dallus Creek and Clay Creek to the north, and Porpoise Creek, Rocky Creek and Sink Creek to the south have all been holding good fish this winter.

Offshore, gag grouper season ends this month, which is too bad since we’ve had some awesome gag catches this month; most kingfish have departed for warmer climes by now. Red grouper are still catchable, and this is a great time of year for catching lots of table fish…. Florida snapper and black sea bass are just as tasty as grouper (actually, black sea bass are in the grouper family). Bottom fishing with squid over rocky areas will work, and those same areas will soon be flooded with sheepshead in a month or so.

We have three big tournaments in January. The Power Pole Pro Tournament is January 9th, with a mandatory captain’s meeting on the 8th at 7PM. You must be a member to fish this tournament. If you’re interested go to www.protournamentfishing.com.

There is a fundraiser tournament for the Gainesville High Fishing Club on January 16th.

On January 23rd, enter the Raider Slam Tournament, benefitting the Santa Fe High School Baseball team. The mandatory captain’s meeting is the morning of the 23rd at 6AM, but there is a social for entrants from 6 until 9 the night before on the 22nd. All events will be at the Sea Hag Marina.

We are looking forward to great New Year, full of family and fishing and travel. We hope to see you soon.