It’s been a challenging month for scalloping. Early summer rains have provided a screen of tannin-stained water that has made locating the bivalves a real-life Easter egg hunt. They are there, but without some clearing water, finding them requires some time in the water. Not that we haven’t had some great scalloping trips.

Inshore fishing was improving in spite of the dark water. Because of salinity, many trout moved out to deeper water in the 8 to 10 feet depths, but there were also some nice trout taken on the flats and close to shore. Redfish were also taken, and near the end of the month began repopulating their usual haunts inshore and near oyster bars. Sand trout were caught around the offshore bars, as were flounder, bluefish, Spanish mackerel, and even tarpon were seen hanging around those areas.

Offshore, there were excellent catches of red and gag grouper, amberjack and kingfish. The large pods of whitebait stayed well offshore but were being tailed by some smoker kingfish and large numbers of Spanish mackerel.

Scallop season is open until September 24th this year. The lack of storms recently has resulted in some clearing of the water, especially on lower tides. Hot spots for scallops have continued to be west of Pepperfish Keys to the south and just outside of Big Grass Island to the north.  For those willing to run a little further, areas around the pretty pole closer to Horseshoe Beach were holding scallops mid-month.  Inshore fishing has been improving steadily in the past few weeks. For guaranteed action, fish with live or cut pinfish or Gulp baits near the offshore bars to the north, 9-Mile Bank and Little Bank.  This is a great approach if you’re fishing with kids. Throw a chum block over the side of the boat and you’ll be catching all the ladyfish, bluefish and Spanish mackerel you could want. You may also find some trout, both sand and speckled.  Fish in the deeper water near the bars but not on top of them. Inshore, when the west winds aren’t overwhelming and the floating grass is manageable, you’ll find redfish near structure, especially when there are mullet and whitebait in the area. Fish jigs with Gulp baits, gold spoons, and suspending plugs such as the MirrOlure MirrOdine to locate some nice sized fish.

Offshore, fishing will continue to be good. Gag and red grouper have actually been found closer to shore than usual, in as little as 30 feet. Fish with frozen Spanish sardines, herring or squid, but for some excellent action bring some live pinfish, which you can pick up at the Sea Hag Ship’s Store. If you want to stay closer to shore, cruise the Short Reef area, just 7 or 8 miles from the first channel marker, and look for hard bottom and schools of migrating whitebait. Either troll with shallow-running lipped plugs, drone spoons or jigs, or drift live pinfish over hard bottom to find kingfish.

September is usually a fantastic month, as the weather begins to calm down with the temperatures. And we’ve got almost a full month left in scallop season, so as things clear up, consider making another trip to take advantage of the smaller crowds and larger scallop meats. Remember that you can always call the Ship’s Store or email me for an up-to-the-minute report on what’s biting and where.

Now for some of our guide reports for this past month… 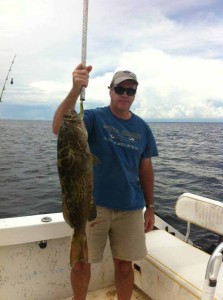 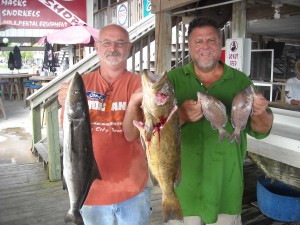 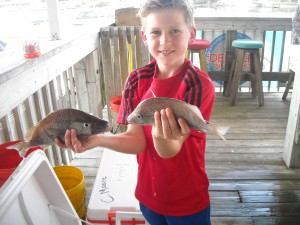 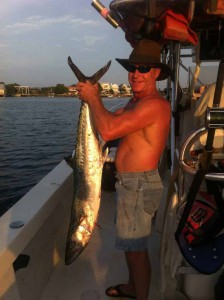 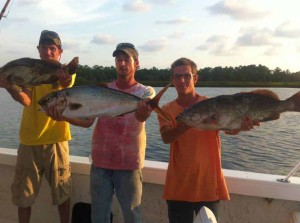 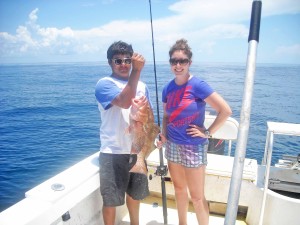 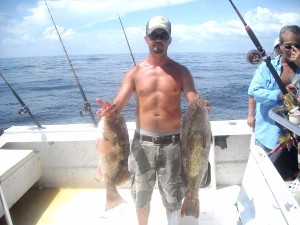 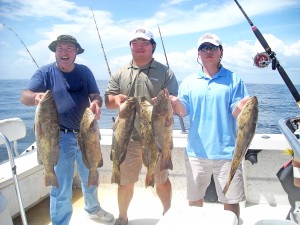 September promises some heat relief from August, but don’t expect the cooling trend to be quick natured.  In terms of fishing, expect the time interval between 11:00am and 3:00pm to be the broiler period and afternoon thunderstorms soon afterwards.  The best bet is to start the fishing day early, to beat the heat and be rolling in sometime during the broiler period to let the mechanical breeze beat the heat on the ride to the “hill”.  However, fishermen going well offshore often don’t get the go early and get in early option, unless you’re riding in a forty knot plus get-it-done-in-a hurry boat.  If you’re in my position, a 22-24 knot economic cruise, you have to adjust to conditions.  Getting out early is a sure option. Quick bopping from one spot to the next (if conditions are favorable, drift fish) or trolling during the broiler period makes comfort.  Also, if seas allow, go to the most distant waypoint first and fish your way back home.  In all situations, everyone needs to drink excessive water.  And, as the skipper, keep your eye on the crew to avoid anyone starting to suffer from heat exhaustion (especially the young and old) and your other eye on the weather.  Being caught in the throws of a strong storm makes for a memorable experience but not a fun fishing trip.  Fishing is supposed to be fun.

This year August water temperatures have only hit 88F according to my thermocouple.  That is almost ten degrees lower than normal.  Red and gag grouper can be caught in the 45-foot range, but are more consistent in deeper water.  Legal amberjack, those over the 30-inch minimum, are hard to catch inside of 50 foot.  Keeper amberjack are best from 70 feet on out.  All the rain has pushed cobia offshore, for the most part.  Outside the brown water near shore, into the green going to blue water offshore always have a flat line out to pick up a cobia or smoker kingfish.  If the weather is questionable, stay closer to shore to catch huge Florida snapper and set out free lines with live bait to pick up gag grouper, kingfish or cobia.  Good luck and stay hydrated. 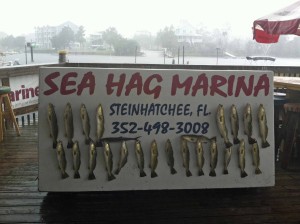 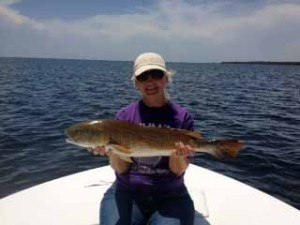 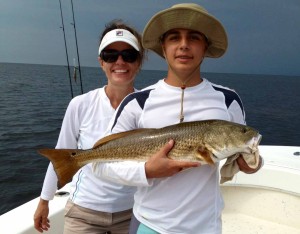 Scalloping has been tough unless you are willing to crawl around in the shallows to find them due to the red water from all the rain. The good news is the trout fishing has been better than usual for August and will continue to get better. The shallow water is about 7 degrees cooler because of all the fresh water. We continue to catch limits of trout with a few redfish mixed in. In deeper water we are finding sand trout with plenty of Spanish and bluefish.