It’s always the best time of the year…late spring, after the chill and before the heat, no afternoon thunderstorms, and no floating grass yet. And as always, April was a great month. Lots of great weather and good tides helped fill the coolers and the Sea Hag board this month. The migration of the pelagic species (kingfish, Spanish mackerel and cobia) has begun as the fish head north. Sheepshead season ended but not until we took home lots of tasty fillets. Big amberjack and red grouper made up most of the offshore action.

Here are some of the fine catches that came in this month to the Sea Hag fish cleaning tables:

Things will continue to be hot on the flats and nearshore. Redfish have been schooling well in shallow water with lots of single fish around as well. Trout are moving from the deeper flats in 5 feet of water onto the mixed bottom shallower flats as the pinfish get larger. As always, drift mixed sand and grass flats in from 3 to 6 feet of water, always casting to the sandy spots where trout lay in ambush. This is the time of year I love to fish topwaters, but for trout, jigs with or without Gulp shrimp, or popping cork rigs with jigs or live shrimp will provide lots of action. For some hot action, find migrating whitebait schools around some of the nearshore bars….9 Mile Bank, Little Bank, Doghead…and troll with jigs or small spoons until you locate some Spanish mackerel. If you really want to keep the kids busy, then throw a chum block over the side and anchor up. You’ll attract not only lots of Spanish, but cobia, blue runners, ladyfish…while we don’t do much flyfishing in our area, this is the time to put a small wire tippit on your 8 weight and fish that chum line. And without a fly rod, light tackle will provide lots of fun. While some people don’t like mackerel (or kingfish for that matter), marinated fresh in Italian dressing and chargrilled is fine eating. Offshore, fish mid-depth structure for cobia or kingfish with live pinfish or dead sardines on the bottom, and hope for a red grouper to come along (gags are in season ONLY if you are in state waters and north of the Steinhatchee River (i.e. Taylor , Monroe, Jefferson, Wakulla or Franklin Counties). There are several tournaments on the docket: The Optimist Club Tournament on May 6, the Cerebrus Tournament on May 20th, and the CCA STAR Tournament for all of Florida begins on May 27th and runs until September 4th. For more information about any of these tournaments, call the Sea Hag Maria Ship’s Store at (352)498-3008.   May will be another fantastic month…moderate temperatures, no floating grass yet, few afternoon storms….it’s one of the best months to fish the Big Bend.

But the most important thing to do this month is planning for scallop season. This year’s season is open from June 16th to September 10th. But if you know the Hatch, accommodations, rental boats and guides fill up way in advance, so don’t delay making those plans now. We’ve already seen plenty of scallops in the shallow water so we’re looking forward to another fantastic season like last year. 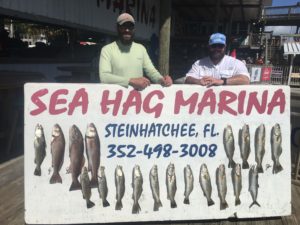 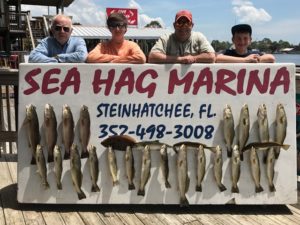 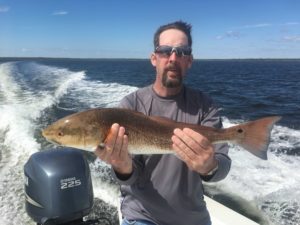 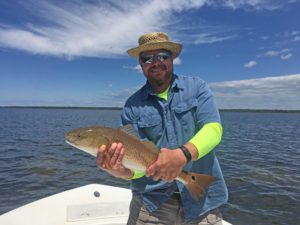 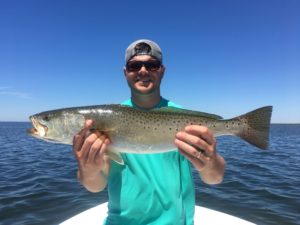 As usual April was a very good month on the flats for both trout and reds.  There were plenty of trout in the deeper flats and a few big ones up shallow with the reds.  Most reds are still in very shallow water but a few are starting to move out to shallow pothole areas. Either direction from the river will produce well. Some cobia are starting to show up as well as plenty of bluefish , Spanish, and ladyfish around the sand bars. May is going to be a great month to fish the flats also. 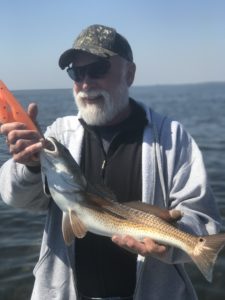 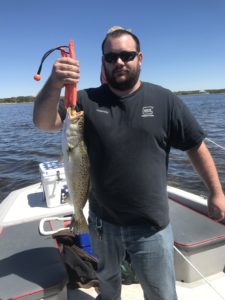 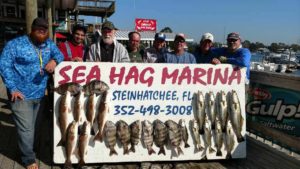 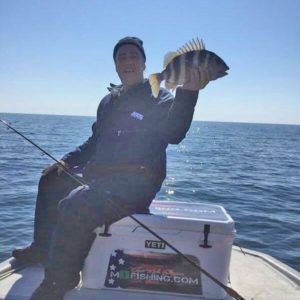