Inshore fishing has blown wide open this month. Multiple successful tournaments, limits of trout and redfish, the whitebait migration is just starting, and the migrating pelagics (Spanish mackerel, kingfish and cobia) and showing up in good numbers. Even some pretty windy weekends didn’t slow things down if you were willing to bounce around a bit. Redfish were schooling and lots were in the tournament-sized slot, although there were also a lot of short fish around. I fished near the middle of the month for two days in 20 knot winds and spent some time in the creeks. Over two days we caught around 15 redfish and 20 trout but most were short. Later on in the month we caught some fine upperslot redfish on topwater plugs, my favorite kind of fishing. Most of the hotspots were south of the river; the shoreline south of Bird Island at Rocky Creek down to Sink Creek was producing redfish, and moving out to 3-6 feet over mixed grass and sand was providing some nice trout limits. Fish caught closer to the river tended to be smaller.  Here are some photos from April:

May is a fantastic month to fish the Big Bend. An important change, however, will take place on May 1. FWC has changed the daily bag limit from two per angler to one per angler. The vessel limit of 8 fish will remain unchanged. Pending are the final recreational season dates for red snapper, which will open on June 1. Sometime in May the final closing dates will be made public. Gag grouper are open in May only in state waters; their season will open in federal waters on July 1.

Every fish that frequents our area will be around in May. Whitebait have arrived in our area, and with them some quick mackerel surprises while trout fishing. Along with the Spanish, kingfish will be following schools of offshore whitebait and hanging around offshore structure. Those same areas with good bottom relief will be holding cobia, which have also been taken on the flats during April. Whenever you are bottom fishing either offshore or nearshore, make sure you have a live bait out under a cork. Use a twin-hook rig and light wire leader, and keep a fairly loose drag to endure the hard first run of a big king.

Inshore, it’s looking like things will be better than ever. And since scallop season starts at the end of next month, you have a chance to get in some fishing with less crowded conditions. Currently keeper trout are in somewhat deeper water, up to six feet in depth, but as the pinfish and whitebait fill the flats, they will move in shallower. Look for clean water over sand and grass, especially with potholes. There are some very productive areas outside of Hardy Point, Tater Island and Sink Creek to the south, and Rock Point, Dallus Creek and the Bird Rack to the north. As the whitebait get even more prevalent, lots of fish will be found around the nearshore shallow bars like Little Bank and 9 Mile Bank. Expect to find sand trout, Spanish, ladyfish, and spotted seatrout. Drift using ¼ oz. jigs with Gulp shrimp or jerkbait tails. In the shallower areas, popping corks with live shrimp or similarly rigged jigs and Gulp baits. Troll Clark Spoons, 52M Mirrolures or jigs around nearshore bait schools with wire leader to target Spanish mackerel. Redfish are going to found around structure, or on low tides in 3-5 feet, moving in with the tide to areas of rock or oyster bars. There are large numbers of rockpiles in the Steinhatchee area, and all of them may hold redfish. Rock Point, Sand Point, and most of the shorelines and points to the south of the river usually have rockpiles. Fish very quietly in shallow water using topwater or suspending plugs, jigs with soft tails, drifted live shrimp, live pinfish, or cut bait around the structure. If you can find schools of mullet in an area, that’s an additional clue that there may be redfish around.

May is a fantastic fishing month in Steinhatchee. May 7th is the Optimist Club tournament, one of the larger local tournaments. And get ready for next month’s Doug Johnson Reeling for Kids tournament and the Nautigirl’s Tournament next month. Ladies, you’re allowed one boatboy per boat so choose wisely. You can get additional information from the Sea Hag Ship’s Store; we recently got in a large selection of new lures and Gulp tails. We’ve got tanks full of fresh live shrimp and live pinfish, and all the rods, reels and tackle you will need to fish our area. Look forward to seeing you on the water in May!!!

Trout are on the flats fattening up for the spawn, and there are lots of gator size fish. Put the ones over 30 inches back to ensure future stocks. There are lots of Spanish mackerel around the bars and cobia starting to appear in the shallows, and redfish are still around the rock piles. 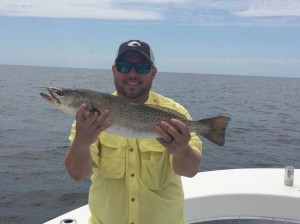 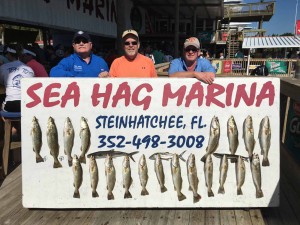 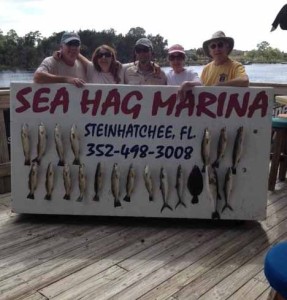 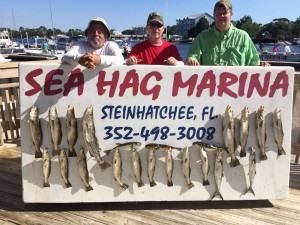 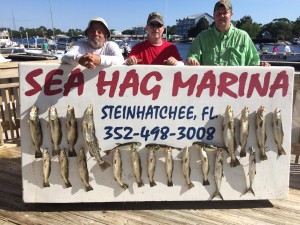